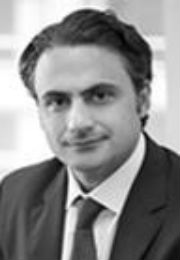 Dr. Firas El Samad is a founding Partner and currently acts as the Managing Partner of the Firm and heads also the Competition Law and the Telecommunication Departments.

In addition to his managerial responsibilities’ Dr. El Samad is specialized in telecommunications and information technology. During his past experience, Dr. El Samad has assisted in the drafting and reviewing of software, telecommunications and related services contracts and license agreements, negotiating with the Egyptian Telecommunications Regulatory Authority and with other entities/authorities on behalf of a number of his clients and has worked to localize international model agreements for implementation in Egypt. Dr. El Samad also handles Anti-Trust matters and provides clients with advice on the various aspects of Economic Law.

Dr. El Samad has been a lecturer in the field of arbitration at the Lebanese University of Beirut from 2000 until 2007.

Dr. El Samad was also involved in trans-national transactions and worked closely with legal teams from various jurisdictions including in other Arab countries, such as Syria, Lebanon, Jordan and the Gulf.

Dr. El Samad was involved in drafting and negotiating complex contracts on behalf of clients with various entities including governmental and quasi-governmental entities.

Founding Partner and Head of Mergers and Acquisitions Group