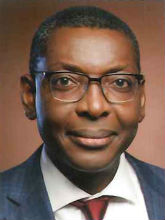 A seasoned legal practitioner with 35 years experience, Chief Anthony Idigbe is the Senior Partner at Punuka Attorneys & Solicitors, a fully Integrated and Multi-dimensional Business Law Practice with offices in Lagos, Abuja and Asaba, Nigeria. He was elevated to the rank of Senior Advocate of Nigeria (equivalent of Queen’s Counsel) in 2000 and was admitted to practice law in Ontario, Canada in 2016.

He has advised clients on several complex transactions and has represented major companies and institutions in the highest courts of Nigeria. He is a well-known Capital Markets Legal Adviser and has advised and acted as Counsel to the Securities & Exchange Commission. He has also been involved as lead counsel in many ‘big ticket’ litigation briefs such as the Kano Trovan Clinical Trial Cases. He also possesses  a wealth of knowledge and experience in Telecommunications Law particularly the workings of the Nigerian Telecommunications Industry, having represented numerous clients in various telecommunications disputes. He has extensive experience in insolvency and restructuring and has acted as counsel to several ex-bank executives in a continuous flow of civil and criminal cases arising from the 2009 Central Bank intervention and restructuring in the banking sector. He has also served on various arbitration panels and is presently a member of the International Chamber of Commerce (ICC) Arbitral Panel over a dispute regarding a software development contract ;and the Presiding Arbitrator, in a London Court of International Arbitration (LCIA) dispute between a company incorporated in the British Virgin Islands and  a West African country with a claim of over $1billion.

Anthony graduated from the University of Ife, (now Obafemi Awolowo University), Ile- Ife in 1982 with a  Second Class Upper Honours. He also received the Hon. Justice Orojo Prize for the Best Student in Company Law. He finished from the Nigerian Law School, Lagos in 1983 also with a Second Class Upper Honours . He has three Masters of Law degrees from: the University of Toronto, Canada (2015); the Robert Gordon University (RGU), Scotland, UK (2012) and the University of Lagos, Akoka (1988). He also has an MBA from the Enugu State University of Science and Technology (ESUT) Enugu (1997) a Diploma in Advertising from Advertising Practitioners Council of Nigeria (APCON), 1999.  He  Lectured at the ESUT Business School, Enugu between 1999 and 2009 and APCON from 2000 – 2002. He has several other diplomas and certifications from various professional organisations.

Along with numerous other appointments in the public and private sector, Anthony in 2017 was appointed acting Chairman of Ikeja Hotels Plc and Chairman of the Nigerian Bar Association’s Legal Profession Regulation Review Committee. He is a Notary Public, author of many published books and articles, and a renowned resource person.