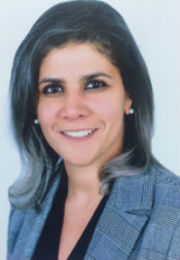 Lamyaa Gadelhak is a Partner within the Cairo office of Baker McKenzie, her practice focuses on banking & finance, energy, mining, infrastructure, M&A, environmental markets and climate change. Lamyaa is a member of the Institute of Energy Law of the Center for American and International Law. She obtained her Maîtrise in Business Law (L.L.B) in 2004, in addition to a Master of International and European Business Law Degrees (L.L.M)  in 2007 both from Université Paris I – Panthéon Sorbonne and graduated from the Cairo University Faculty of Law in 2004. Lamyaa is fluent in English, Arabic and French.

Lamyaa was admitted to the Egyptian Bar of Association in 2005, with more than 13 years of experience she is now considered as an authority on Energy insights, she has contributed to various publications offering insight on renewable energy, emissions trading, climate change and carbon capture & storage. She was also a speaker in renewable energy and climate change panel related topics at industry conferences.

Lamyaa is recognized over the years for her distinguished work in the areas of Banking and Finance and Energy, she was ranked various times as a leading lawyer by global directories throughout the years 2010-2019, Lamyaa manages a huge portfolio of clients from different jurisdictions which made her gain respect from a range of sources. Commentators from global directories describe her as "very smart" and "an amazing lawyer," noting her impressive capabilities as a negotiator and contract drafter, while others from IFLR 1000 describe her as "Technically very savvy, excellent negotiator, responsive.”

Admitted with the Egyptian Bar Association to practice in 2005

Member of the Institute for Energy Law of the Center for American and International Law.