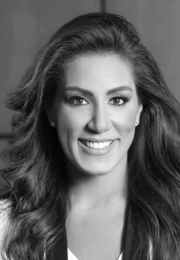 Souraya Machnouk is a partner at Abou Jaoude & Associates Law Firm, and heads the M&A practice. She previously worked at Norton Rose Fulbright in Paris. Souraya has more than 15 years of experience advising prominent clients across industries, with a practice distinguished by an in-depth specialization and a particular expertise leading on complex ground-breaking transactions.

Souraya is consistently recognized as a leading lawyer by prominent international directories, including Chambers & Partners, The Legal 500 (Hall of Fame) and IFLR1000. She was named to IFLR1000’s Women Leaders in EMEA, which recognizes “the most prominent female lawyers working in the areas of law”.